It was 10.00 when I reached. The bank was just open and the transactions were about to be started. 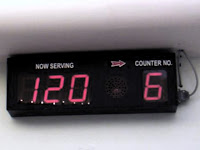 The machine with a dirty yellow button spat out TOKEN NO:55 on to my hand. I picked up the form to file a DD application and sat down on the waiting chair. It was nice to see all the 15 multipurpose counters open and getting ready to start serving.

In short, out of the 15 counters assigned, only 5 will function. That is one third of the total number. Still, that doesn't matter much to me. 5 counters and if each takes 5 minutes, my turn will come in an 1 hour or so. I got back to filling the DD application form.

As I finished filling, it was 10.15 and number 8 that was the last called token. Now I had some 60 minutes to kill and decided to find out what the non-functioning counters were up to.

Counter number 1: A 120 something lady who is busy talking over her phone. Well, 120 in not her age but weight in Kg . Looks like she fell directly into that cubicle from above like a jello.  The fact is , she can't serve even if she wishes to. There is no space for anybody else in that cubicle.

Counter number 3: It read "Assist Accounts Manager". This is again a lady. She is relaxing happily on her semi reclined office chair exposing her well fed belly and breathing the fresh morning air. I doubt if she was on audition for B grade Bollywood.

Counter number 5: This man is reclining on his chair and talking over the phone with his right hand scratching his groin. You could make out the pleasure on his face when he did that. I think he should meet me in my clinic for treatment before he handles any currencies.

Counter number 8: She must have cracked a dirty joke. This man sitting next to her is laughing his stomach out. Ok, here I see a 50 something uncle, sitting an chitchatting with a pretty unpretty aunty in her 40s. They can't be blamed. They needs to vent their feeling too.

Counter number 10: Somebody had been put to fast at home I think. This young man is busy eating his nails. Once when he is done with one nail, he carefully palpates the rest of the nails for the best next option.

Counter number 11: This 40 something man is really upto something. He is busy reading the news paper. He has his one hands on the table and the other underneath. He seem to be shaking his leg vigorously or is he shivering?

Counter number 12: That's a dump yard of files. If I go stand near that counter, I'm pretty sure, I will be shorter than that pile of files on the right which read, “PENDING VERIFICATION”. In an office like this with heavy work load, and everybody busy attending to the customers form morn to eve, with too much of under-staffing, I'm not surprised to see that pile. They are doing a good job!!

Counter number 13: This guy is busy counting. He picked up a bundle, counted it first, then the machine and then him again. Looks like he is expecting it to multiply each time they are counted.

Counter number 14: “SPECIAL COUNTER” handled by a special lady. She is busy calculating and noting it down. But what will a bank officer need to think so much and then write down on multiple squares on a newspaper. I don't know. But she is at least playing with numbers.

Counter number 15: She is busy working. Working her make up! With her bag wide open, she pulled out the lipstick, pushed back the foreskin cover and started rubbing it on to her lips with such passion that I felt she had her climax then and there.

I looked at my watch and it was already 11.30. Now that I 've killed one solid hour, I was sure my time is going to be arriving soon.

But no, Token number 24 counter nummber 6.

Oops, that meas all other counters other than 6 have closed. And not even half the token been called. What the bloody hell!!! Now what do I do? I badly want to leave. But things are nearing last date and they accept DD from this bank alone. I think I'll wait. After all, it's Sloth Bank of India.